Welcome to the first in a series of posts that will provide a preview of some of the new features that will be included in Version 9.

The Modifiers feature of Uniwell AX/HX POS Terminals provides an elegant way to handle product variations. For example, a café may use modifiers to allow for small, regular, large and extra-large drinks – giving each variation a different price.

Version 9 will include support for programming the modifier messages used to identify variations of a product.

These modifier messages will also be shown in the drop-down lists when editing items making it much easier to setup modifiers for your products.

An Item Sales by Modifier Report will also be included in Version 9 so that you can analyse your sales of product variations. 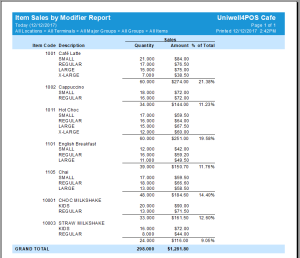 View all posts by Lynx Software